Sadly Yohee was unwell and couldn’t join us for the trip to the Great Wall (长城).

So this morning, Angela, Leo and I boarded a bus to go to Mutianyu (慕田峪) – since it was a public holiday we had decided to go somewhere that should be quieter than the most popular place, Badaling (八达岭).

However, at one stop a man got on the bus and looking at me (or so it seemed) started shouting something in Chinese.  I thought he seemed a bit crazy at first.  I looked at Leo, and Leo started a conversation with the man.  Then motioned that we were going to leave.  So we all got of the bus and followed this guy to his car.

It turned out he had been saying that he could take us to a better / even quieter part of the Great Wall called Xiǎngshuǐhú (响水湖).

Looking at various websites now (such as https://www.travelchinaguide.com/china_great_wall/scene/beijing/xiangshuihu.htm) I’m not sure we got the best deal.  Nevertheless, it was a very pretty place, and there were certainly not many people, and I enjoyed the village atmosphere.

The way up to the wall was through a sort of mountain garden, or gardens, with a stream running down through several pools.

Some of the plants had signs next to them explaining what they are, and what they are useful for.  This one in particular caught my attention due to the error in the Chinese leading to a rather strange “use” of “tomorrow”.

(For those who don’t know Chinese, 明日 should be 明目。)

We had climbed up to a part of the wall called “Donkey Saddle Hill”.   I thought it looks more like an elephant’s back…

The part of the wall we were on has only been partially restored, so perhaps not quite as grand as the more touristy areas, but the views were still amazing.

We got to a point where we thought the section was closed, so we headed down prematurely and came to the modern dam section.  As it turned out we had not paid to go on this section, but Leo calling our driver somehow managed to persuade the security guard to let us explore further.

Or as a comedian once wrote:  “The Great Wall of China:  A miracle of Chinese engineering – So big that it can be seen from anywhere in the world.”

Afterwards we headed back to the city by tiny bus which was packed.  I was standing with my leg against the engine compartment.  At one point, having let go of the handles to try to take photos, the driver suddenly stopped and I went headlong on top of it.  Slightly embarrassing.  And painful. 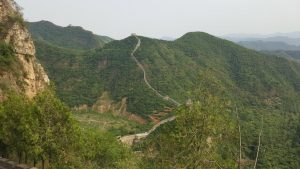